It was a celebration unique in Lake Cowichan’s history.

The town’s Ts’uu-baa-asatx Square was packed with hundreds of residents and visitors who had come to see the culmination of special journey as a stunning totem pole was raised Saturday morning, Nov. 14.

The beautiful pole, a gift to the townspeople from the 20-member Lake Cowichan First Nation (Ts’uu-baa-asatx), had been carved outdoors near the square during the summer by Chuuchkamalthnii (Ron Hamilton) and two assistants.

Wearing colourful regalia, he led the ceremony that raised the pole from its bed of cedar boughs, first scattering feathers over it with Kristen Hamilton and then calling on various groups for assistance in erecting the tall sculpture. In that way the area’s forest industry workers, community safety folks, children and women all got to lay a hand on the rope and pull together.

Once it was raised, Chuuchkamalthnii called on Lake Cowichan’s legendary welder Bob Godfrey and he came forward, dressed in his equally legendary Stanfields shirt, to supervise bolting the totem to its steel support.

Click the image below to see a gallery of photos from the event. 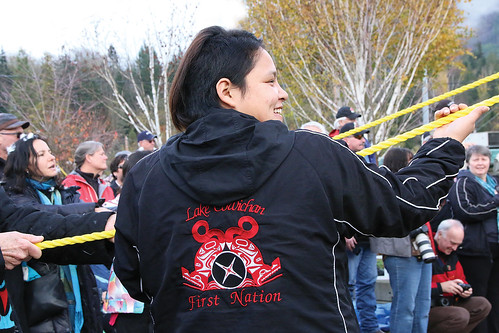 Sha e’lum, spreading his hands and looking up at the sunny sky, said he had “asked the Creator” to bless the day with good weather and his wish had been granted.

An emotional Cowichan Valley MLA Bill Routley spoke for most when he shared that he had been strongly moved by being allowed to take part the community-building exercise of physically raising the pole.

Chuuchkamalthnii then told the story of how the totem came to be.

He told the crowd that he had been unhappy, when arriving in the community, to see that there had been no official notice taken by the Town of Lake Cowichan that there was a First Nation in their midst.

He then called forward Jayne Ingram and shared how he had met the former town councillor coming out of Curry in a Hurry one day a couple of years back.

Chuckles from the crowd followed this reference to Ingram’s encyclopedic knowledge of her community.

He told her about his idea to carve and erect a totem pole and she promised to work towards bringing the idea to fruition.

Then, the carver began to tell the stories of the images that could be seen on the pole, explaining that the three faces on the top stand for the past, present and future, how the hole stands for a special cave near Mesachie Lake and what the other creatures all signify.

To complete the ceremony at the square, the male members of the Ts’uu’baa-asatx Nation drummed and sang a song while the women and girls danced slowly around the pole.

Afterwards, Melanie Livingstone said the day was very special for the nation’s members.

“The last time my family has danced was the 1950s. So proud to be Ts’uu’baa-asatx. I am so grateful to Ron Hamilton for teaching me and my children our culture. Klecko klecko,” she said.

After the dancing everyone crowded around to have photographs taken with the new pole and then everyone was invited to Centennial Hall for a celebration feast and further ceremonies.

Abundant craft beer and food for consumption at Cowichan festival