Listeners of Radio Cowichan are in for a treat later this month when local students take to the airwaves in two upcoming radio plays.

Click on the image below for a photo gallery. 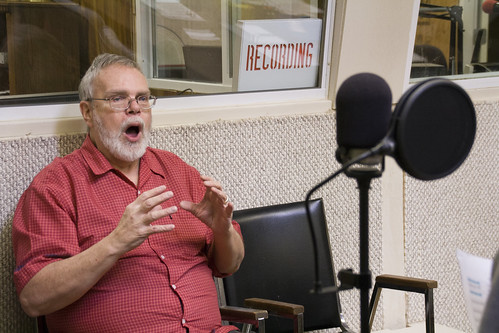 “I think it’s important for them to have some experience with public speaking and feeling more confident with speaking out loud in front of an audience,” she said.

The class has been rehearsing the two plays since December as part of their language arts and drama classes. Hartshorn said her students have been enthusiastic about the project since the beginning, and that getting to go on the air eventually “took it to a whole new level” for the students.

“Doing it in the classroom is one thing, they were loving it then, but when I told them they were going to get to go to the radio station and people like their parents and grandparents would get to hear it, and even people out of province could tune in to it online, they were very excited.”

The children who didn’t feel comfortable being recorded while speaking were in charge of sound effects.

“Nobody didn’t want to be involved at all. Everybody wanted to do something,” said Hartshorn.

Michael Bishop, director of the Cowichan Valley Community Radio Society, gave students a tour of the radio station and provided direction on how to use the microphones and perform for radio.

An air date for the productions has not been set, but Hartshorn said she will inform parents through the school’s weekly newsletter.

Fight for Team BC starts in Lake Cowichan

Town hall on proposal for new marine conservation are postponed

Robberies, shoplifting on the rise in Duncan area, RCMP say