With 2016 now underway, one of Lake Cowichan’s biggest annual sporting events is just around the corner and organizers are reminding folks to come out and show their support for local up-and-coming athletes.

The Lake Cowichan Minor Hockey Association’s Hockey Jamboree will be held on Jan. 16 and provides a full day of hockey for teams at all age levels, from initiation to midget. This year’s event is being held just before B.C. Minor Hockey Week, which runs Jan. 17 to 24.

“We’ve always just tried to have a day when we can showcase the kids close to that time,” said Jenny Fawcett, director and registrar for the association. “It’s always the third weekend in January.” 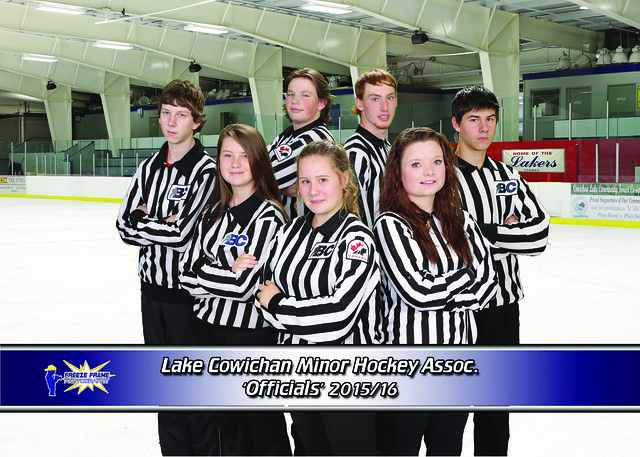 Fawcett said visitors can expect the arena to be busy as ever with all the Jamboree staples in addition to the hockey games, including raffles, 50/50 and the skills competition. Fawcett, who manages the novice team and whose two youngest children are currently minor hockey players, said attending the Jamboree is a positive experience for players and non-players alike.

“It shows them how great of a sport hockey is,” she said. “It shows how the kids have developed over the years if they come year after year they can see them grow. It gives kids the opportunity who wouldn’t normally come out to a game at all different levels.”

Halfway through the day, all Lake Cowichan players will join together for a skills competition.

Players are divided into two teams — the whites and the blues — that compete in skating, stick handling and shooting. Hieta said this year there are seven players graduating from minor hockey, and so (time permitting) the association is planning to add a 3-on-3 showcase to the skills competition with players from the midget team.

Coach coordinator Duncan Baird noted that with the NHL adopting the 3-on-3 tournament as part of its new 2016 skills competition format, the local association thought it might be fun to try something similar.

“It’s not the same as the NHL but it’s the same kind of idea,” he said.

Baird echoed Hieta’s comments about the benefits of having players from age four all the way up to 17 playing together.

“And if they have brothers or sisters in the association that are a couple years apart it gives them a chance to get out there on the ice at the same time and the parents get to see their kids out at the same time,” he said.

Baird said he wanted to thank all the people working behind the scenes to make the Jamboree happen or who are involved with the association in other ways throughout the year.

“There’s a lot of people who put a lot of work in and I think they deserve a lot of credit.”

More than 1,500 march in support of Penelakut Tribe’s March for the Children